11 artists and performers announced as Birmingham’s most impressive music festival returns to Perry Park for its 6th year. 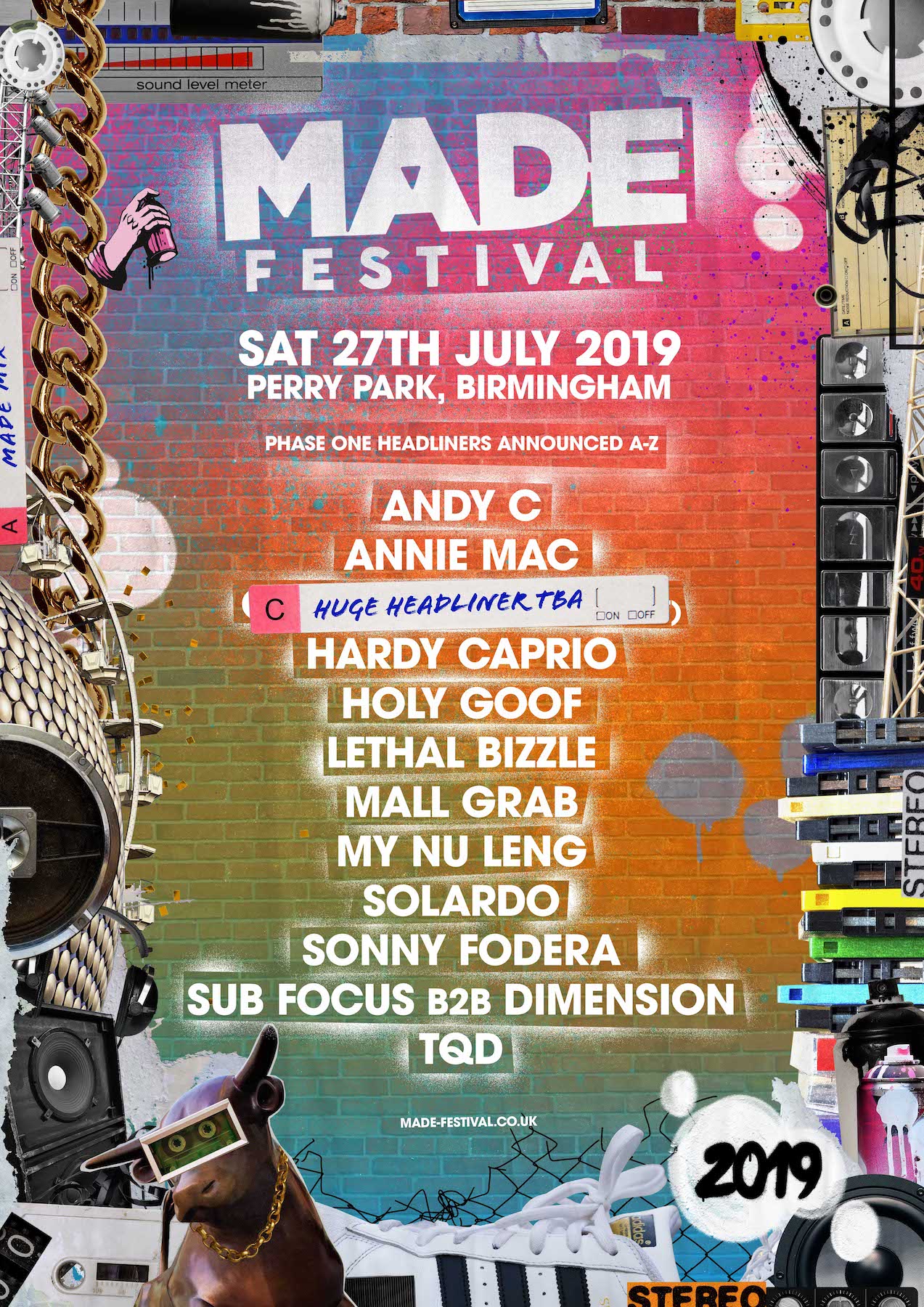 The West Midlands’ biggest and best-loved music festival returns for its 6th year after a successful move to Perry Park last year. As ever MADE Festival promises to deliver a huge line up of artists and performers as it celebrates cutting edge music and modern street culture in one of Birmingham’s best green spaces. Kicking off the MADE 2019 line up are Andy C, HARDY CAPRIO, Holy Goof, LETHAL BIZZLE, Mall Grab, My Nu Leng, Solardo, Sonny Fodera, Sub Focus B2B Dimension (UK Festival Exclusive), TQD (Royal-T x DJ Q x Flava D); a bill sure to cause excitement among MADE Festival regulars, and with more massive names still yet to be announced. MADE Festival 2019 takes place over Saturday 27th July, from 11.00 to 22.00. Pre-sale tickets are available at 10am on Thursday 31st January and general sale tickets on Friday 1st February starting from just £35 + b/f with VIP starting from £65 + b/f. Pre-sale sign up available here.

MADE Festival has carved an unrivalled reputation for bringing the very best exponents of boundary pushing music to Birmingham, while still supporting local up and coming artists. MADE Festival has previously welcomed the likes of Stormzy, Rudimental, Giggs, MK, KANO and Dizzee Rascal, while endorsing the biggest talents the West Midlands has to offer such as Goldie, Mike Skinner, Hannah Wants, Chris Lorenzo, Preditah and LADY LESHURR. Birmingham’s graffiti artists, award-winning street food vendors, set designers and more are also offered a platform to show what they can do, as MADE 2019 looks set to up the ante.
An artist truly at the top of his game, Andy C recently sold out Wembley Arena in an hour, as well as a 13-week headline residency at XOYO. Anyone who caught the Ram Records boss at MADE Festival last year will know just how special this 2019 set is going to be. BBC Radio 1’s Annie Mac returns to MADE Festival, with a record box full of the biggest new tunes, underlining her status as the UK’s leading tastemaker and a DJ in the highest demand. Look out for HARDY CAPRIO, the UK rapper rising up the ranks in spectacular style after breaking through with his single Unsigned scoring over 14 million YouTube views. Coventry-born, Holy Goof is well known to MADE Festival crowds. A phenomenal 12 months has seen him get a seal of approval from Drake for his ‘God’s Plan’ bootleg, smash a 3-month tour of the USA and launch his new album ‘Globes’.

Also lining up is More Fire Crew original, LETHAL BIZZLE, the man behind a string of hits including ‘Pow’, ‘Rari Workout’ and ‘Fester Skank’, known for blending mainstream genres with grime to get the crowd jumping. Mall Grab steps up for MADE  2019 and the exciting young Australian DJ / producer is set to make his mark with his diverse selection of house and techno. MADE 2019 also gets ready for My Nu Leng. The Bristol duo remains in high demand around the world for their uniquely danceable vibe, crossing bass, grime, UK garage and drum ‘n’ bass. A big treat for MADE festivalgoers is Solardo. The Sola Records bosses and tech house aficionados will arrive off the back of an Australian tour and new collaboration with Camelphat. With big releases on Defected Sonny Fodera always delivers quality house music and is guaranteed crowd-pleaser.

In a massive UK festival exclusive, MADE Festival 2019 welcomes Sub Focus B2B Dimension, promising a stunning drum ‘n’ bass set as the duo celebrate the ongoing success of their collaborative track ‘Desire’Desire’. Rounding up the first line up announcement is TQD the cutting edge collab comprised of ROYAL–T, DJ Q and Flava D, mixes up UK garage, bass and everything in between to tear up the stage.

the perfect location for made festival

Last year, Perry Park, in Perry Barr, proved itself to be the perfect location for MADE Festival. At only around 10 minutes by train from New Street, or 10 minutes in a taxi, Perry Park continues MADE Festival’s local roots but provides the ideal space and a safe environment for the West Midlands’ biggest and most impressive music festival. Festival Director, Pete Jordan, commented: “We are extremely pleased to be bringing MADE Festival to Perry Park again this year. Last year’s debut at the amazing site was an unprecedented success for the city, and we appreciate the support we received from the statutory authorities, local businesses and residents.

MADE Festival 2019, our sixth edition of the event, will see our biggest and most diverse line up to date, whilst continuing to support and nurture Birmingham’s fantastic music, arts, creative and food scenes. As the West Midlands’ premier festival we are proud to continue to fly the flag for Birmingham and be part of the second city’s exciting and ever growing national and international reputation as a place to visit, work and reside.“
MADE Festival is operated by Weird Science and sees them continue on their mission to bring world-class music events to Birmingham. MADE Festival 2019 promises to be bigger and better than ever.

Find more information on the offical website and visit our event page for tickets & accommodation opportunities. Follow us on FACEBOOK and INSTAGRAM for both latest lineup updates and festival impressions right in your hands.

Image credits to MADE